The Occupational Safety and Health (OSH) Act of 1970 empowers OSHA to enforce rules pertaining to health and safety in the workplace.

OSHA standards may require that employers adopt certain practices, means, methods, or processes reasonably necessary and appropriate to protect workers on the job. Employers must comply with all applicable OSHA standards and provide workers with a workplace that does not have serious hazards.

Even in areas where OSHA has not set forth a standard addressing a specific hazard, employers are responsible for complying with the OSH Act’s “general duty” clause. The general duty clause [Section 5(a)(1)] states that each employer “shall furnish . . . a place of employment which is free from recognized hazards that are causing or are likely to cause death or serious physical harm to his employees.”

Training plays a key role in the prevention of accidents and OSHA compels companies to provide sufficient safety training in a language that workers fully understand.

Who is Covered Under the OSH Act?

The OSH Act covers most private sector employers and their employees in the 50 states, the District of Columbia, Puerto Rico, and other U.S. territories. Coverage is provided either directly by the Federal OSHA or by an OSHA-approved state job safety and health plan.

Federal OSHA also covers certain workers specifically excluded from a state plan, such as those in some states who work in maritime industries or on military bases.

The OSH Act established a separate program for federal government employees. Section 19 of the OSH Act makes federal agency heads responsible for providing safety and healthful working conditions. Although OSHA does not fine federal agencies, it does monitor them and conducts inspections in response to workers’ reports of hazards. Under a 1998 amendment to the OSH Act, the U.S. Postal Service is covered under the OSH Act just like any private sector employer.

The Act does not cover:

While some standards are specific to just one category, others apply across industries. Among the standards with similar requirements for all sectors of industry are those that address access to medical and exposure records, personal protective equipment, and hazard communication.

Description of OSHA Laws and Regulations

The OSHA Act defines regulatory parameters, which OSHA uses to regulate safety and health issues. It requires that all employees and employers must comply with general or industry-specific standards. The requirements extend to areas that the agency is yet to set standards dealing with a specific hazard.

The Act is aimed at different types of workplaces and employers, including commercial, industrial, and religious organizations. The latter is covered if an entity employs individuals for secular purposes. Airlines and nuclear facilities are included as well. Some of the key areas covered by the OSHA regulatory framework include:

How to Avoid Workplace Accidents and OSHA Penalties

OSHA is entrusted with the responsibility to enforce laws and regulations. It achieves the purpose by conducting inspections and issuing penalties for noncompliance. The agency is permitted to revise the applicable fines upwards in a bid to deter noncompliance. Serious violations can cost employers thousands of dollars.

Companies can take the following measures to prevent violations and penalties: 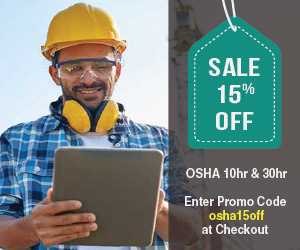 As we transition to warmer temperatures, it’s important to revisit your workplace’s Heat Stress Prevention Program to ensure your employees are equipped to combat...

Understanding the potential harm caused by working in high temperatures is only the first step when it comes to protecting your employees. The next...

Fatalities caused by falls from elevation continue to be a leading cause of death for construction employees, accounting for 350 of the 937 construction fatalities recorded in 2015 .

There are a lot of different facepiece respirators available. If you’re like most people, you’ll be confused if you find these other masks and won’t be sure which to buy.

Whether you’re driving in your neighborhood or on a busy highway, making responsible choices in work zones is essential. National Work Zone Awareness Week (April 3-7) is an annual opportunity for motorists to evaluate their driving habits just in time for the busy spring and summer construction season.
Load more
© Copyright 2009-2019 365 OSHA Training. All rights Reserved.
A leading provider of construction and occupational safety training. Is your organization compliant with OSHA standards? We can help you comply for the safety and well-being of your employees. Our Outreach training courses are accepted by OSHA and powered by 360training.
MORE STORIES